Excerpt from MARRIED TO THE SHERIFF

Enjoy this little snippet from my latest release!

Miami Beach. Only a day earlier, Debbie Phillips mused as she put a pot of coffee on the stove, she had been in that wildly romantic, tropical place on her honeymoon, time spent with the most wonderful man in the world. Those five days had been taken up with palm trees, beaches, restaurants, champagne, and more romance than she ever dreamed she would share with a man, after having been single for the first thirty-seven years of her life.

Now, oddly enough, being at home was no less magical. That cozy, modest Cape Cod house in Massachusetts, where she was born and raised, was every bit the paradise she’d encountered in the Sunshine State. Even more so because that day marked the first day she would actually be living there in her house, following her wedding and honeymoon.

It was paradise because she was living there…with her husband.

“Oooooh—I have a husband!” she whispered excitedly under her breath.

And it was Brandt now. Debbie Brandt, not Phillips. Phillips was her maiden name. Now she was Mrs. Michael Brandt.

From the kitchen, she could hear her husband calling out to her from upstairs in their bedroom. “Honey, don’t go through a whole of trouble. I can pick up a doughnut or something on the way to work.”

“A doughnut? No, sir, I wouldn’t hear of that!” she called back.

She cracked the eggs and beat them with a whisk, adding a few drops of milk to the bowl. The bread slices waited in the toaster and she’d already taken the butter dish out of the fridge so it would be soft enough to spread. To lighten up breakfast somewhat, she’d already sliced up a couple cups of strawberries and dusted them with a teaspoon of sugar. From the radio in the corner, the Chordettes’ honeyed voices were warbling, “Mr. Sandman.” Debbie hummed along with the tune, content as she set the table for two.

That was probably how the folks in town were referring to her: The sheriff’s new wife. Actually, she was the town sheriff’s only wife. That recent trip down the aisle had been the first for both of them. For Mike, who had recently turned forty, it marked the end of his bachelorhood.

“Well, look at you, baby! You look like a movie star!”

When Debbie spun around, the skirt of her dress twirled right along with her movement. Her breath caught at the sight of her husband filling up that doorway with his lean, six-foot-plus frame. People always said there was something about a man in uniform, but that saying went double when it came to her husband. Mike cut a dashing, handsome figure in his brown sheriff’s uniform. His sunglasses hung from his shirt’s breast pocket. Right above that he had pinned the star badge that read SHERIFF. He’d managed to tame the waves of his blondish brown hair, and he stood there, gazing at her with a smile filled with husbandly affection.

“Better than a movie star,” he corrected himself. “What did you do? Wake up early just to get yourself all dolled up?”

“I most certainly did!” she exclaimed, giggling. “We’re newlyweds, remember? I’m still your bride. That means you’re not going to catch me looking frumpy or with hair curlers in my hair or anything.”
Mike stepped further into the room, wrapped his arms around her waist, and pressed her up against him. He tilted his head back, inspecting her hair.

“You look different,” he observed out loud.

“Do you like it?” Debbie smoothed her hair. “I let my hair down. The style is new.”

“Love it.” He couldn’t resist kissing her, though the little peck on the lips turned into a steamy kiss.
She flattened her hands against his broad chest. It was necessary to catch her breath before saying, “If you keep that up, you’ll be late for work.”

“Well, we can’t have that, young lady,” he mock scolded, giving her rounded behind a light spank. “So are you going through all this trouble, making a breakfast fit for a king, every morning of our lives? Do that, and you’re going to spoil me. Not to mention I might eat my way right out of this uniform.”
Smiling, she finished setting the table. “I am going to spoil you, Mike Brandt. Sit, honey. Is the radio too loud? I can turn it down.”

“Nooo, leave it on. I like that song.” Grinning, he took a seat and watched her pour coffee into their cups. “What’s that called?”

“I think that’s ‘One Mint Julep.’ Yeah. That’s the name of it.” Carefully, with the spatula, she coaxed the scrambled eggs out of the pan, equally distributing them onto two plates. What was left over she gave to Mike. “Pretty day out there.”

“Sure looks like it will be. I hope my bride makes sure she makes time today to enjoy it.”

“Oh, I hope so, too.” She tossed a smile at him over her shoulder. “I know I’m going to be busy today. I thought maybe I’d clean the downstairs first, then the upstairs tomorrow. That’ll give me time to get into town and pick up a few things.”

“That sounds great. I’m sure you will be busy, baby.” He picked up the newspaper, which she had thoughtfully set on his side of the table. He skimmed the front page but then folded it up again when she set his plate before him. “Toast. Butter. And strawberries, too. A fellow could get used to this treatment.”

Juice. That was the only thing she’d forgotten. Debbie fetched it from the refrigerator and poured them each a small glass.

“Oh, and I do have those thank-you cards to sent out to our friends and families for the wedding gifts,” she said, sighing. “Almost forgot about them.”

“Send them tomorrow. Pace yourself, baby. I don’t want you getting worn out by the end of the day,” he gently scolded her. “The thank-you notes can wait. If you get a chance—no, let me put it this way, make sure you make time to meet your girlfriends for lunch or coffee later. A little time to yourself will be good.”

“I’ll do that, but first I have to get some of the housekeeping and laundry done. I am going to be the best wife in Lighthouse Cove.”

Reaching across the table, Mike grabbed her hand and kissed it.

“You already are the best wife in Lighthouse Cove, Debbie,” he assured her. “Now I mean it. You just came home from your honeymoon. Don’t overdo it. Besides, your friends are all going to want to catch up with you, find out how Florida was. You can spare an hour or two for them.”

She tilted her head to the side and gave in. “Well, okay. I’ll do that. An hour.”

“Or two,” he reiterated firmly. “As long as supper’s on the table when I come home from work, I don’t see why you can’t have a little time to yourself. Have some fun, honey. Be a good girl, of course, but have fun. Just don’t get yourself into any mischief like…you know.”

Debbie had just pierced a strawberry slice with her fork. She looked up. “Like what?”

“Like that time before we were married. We were still dating at the time,” Mike reminded her. “And you and that Laura Dunaway started playing matchmakers for that widow, Mrs. Hepburn.”

She shrugged and wrinkled her nose. “Well, there was no harm in that.”

“It’s not a matter of there being no harm in it or not. Mrs. Hepburn’s affairs are none of your business. Yours or Laura’s. But Laura isn’t married to the town sheriff, Deborah. You are.”

He was using her full name? That was a new one. She hadn’t heard him do that before. He was also speaking in an almost stern tone that she had heard upon occasion. She wasn’t even quite sure what to say, and it was just as well, as he went on.

“You’re sort of in a fishbowl, baby. I try to lead by example, and as your husband, I expect you to do the same. That’s just the way it is when you’re the sheriff.” Mike waved a hand in the air. “But enough of that. I don’t want to give you a lecture the day after our honeymoon.”

I would hope not, either. Although, she had to admit, she kind of liked that authoritative side of him. At the same time she wasn’t totally used to having a man boss her, having been on her own for so long. Instead of bringing that up, she rose from her seat and eased herself onto his lap, hugging his neck. He responded right away, cuddling with her.

“I promise I’ll be a very good girl,” she murmured, making an “X” over her left breast with a manicured finger. “Cross my heart. And I mean it, Sheriff: You will have the best wife in Lighthouse Cove. You’ll be so proud of me!”

Posted by Kira Barcelo at 6:00 PM No comments:

Here it is--the cover of my new book, Married to the Sheriff! This fun spanking romance, a romantic comedy set in the 1950s, is being published by Blushing Books. Head on over now for your copy. As for me, it's back to work on my first historical Western romance. 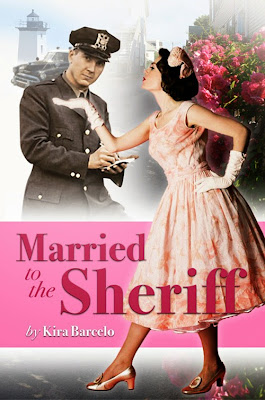 Posted by Kira Barcelo at 5:56 PM No comments:

Coming soon! As in, the next couple/few days or less, maybe even in tandem with the release of MARRIED TO THE SHERIFF. Beyond excited to have a new book out with Blushing Books. I have been writing, just under another pen name, but this is the first book writing as Kira in a long time. Also have a couple of irons in the fire, though I'll be pushing to the front of the line a new romance with a sexy, no-nonsense cowboy. This is my first historical Western, as of right now untitled. But more on that later...let's talk about MARRIED TO THE SHERIFF for now! Bookmark this spot because the cover is coming VERY soon--and so is the release!
Posted by Kira Barcelo at 4:13 AM No comments: 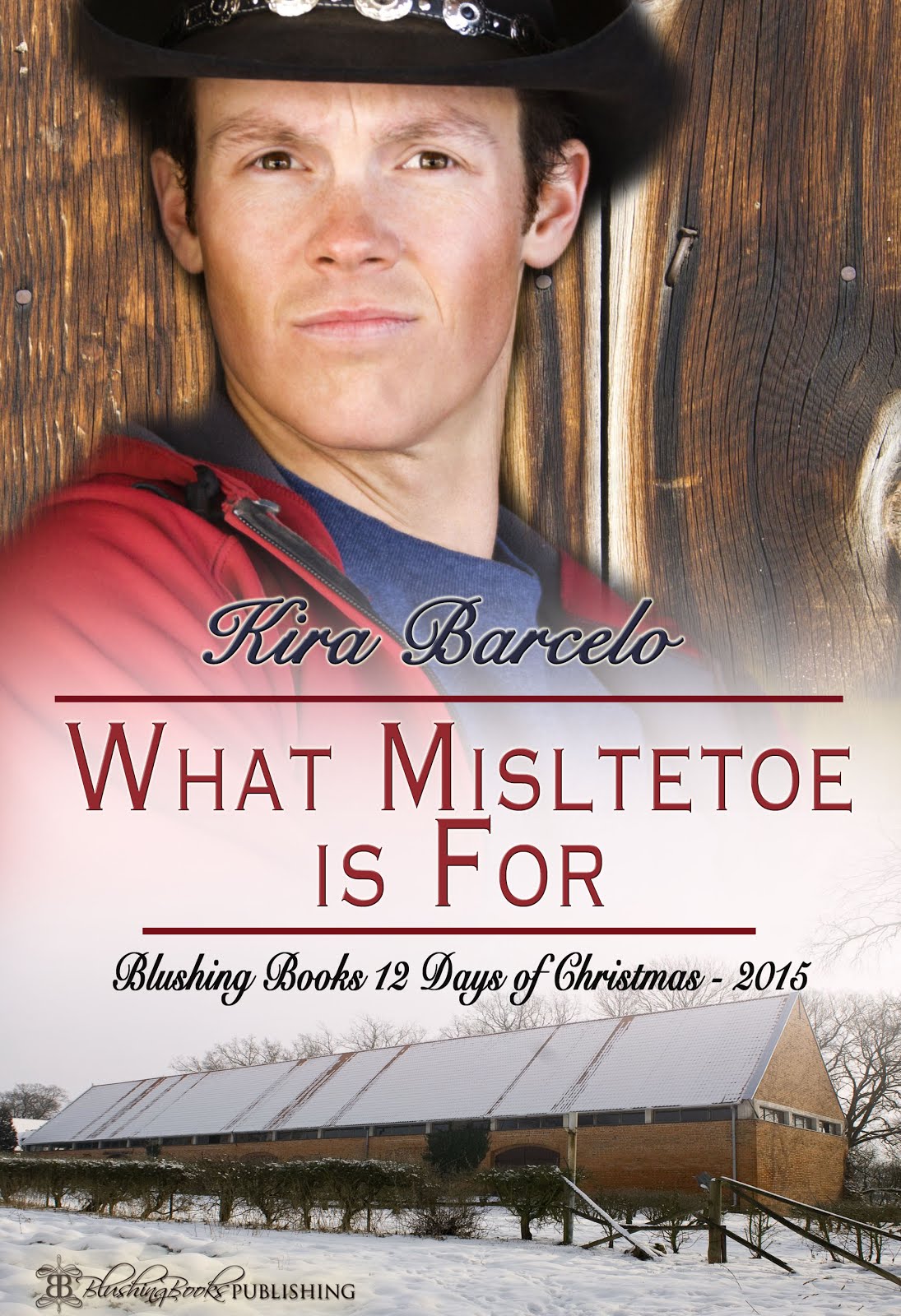 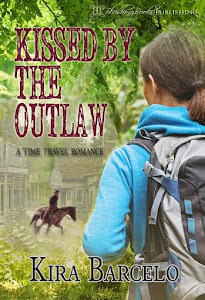 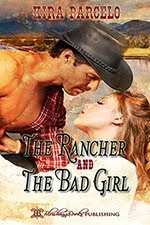